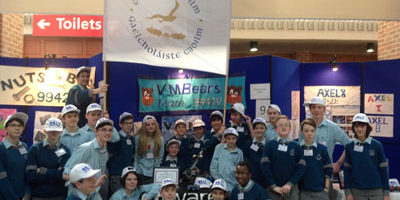 Well done to our 3 Teams from CC/GC Robotics club who particpated at the DELL/EMC National Robotics Finals at the Nexus in CIT on Friday January 20th. Teams 9942V, 9942E and 9942X designed, built and programmed their robots over the weeks since September.

Two teams reached the knockout stages with professional performances by the pit teams of Captain, Driver & Mechanic from Nuts & Bolts and VMBears.

For the final matches the VMBears formed an alliance with the G-Raf team from Coláiste Spioraid Naoimh and won the final game in spectacular fashion to become joint Ireland National Tournament Champions. Congratulations to Mr. O’Connell who mentored the winning team 9942 VMBears which was kindly sponsored by VMWare, Ballincollig. A special congratulations to the VMBears Pit Team of,Greg Barrett (Captain), Craig Murphy (Mechanic) and Ryan Power (Driver). This was a fantastic achievement for a first year group competing against many TY & senior teams.

Students give Voice to their perspectives on Education
March 13, 2022
Twitter:
Go to Top